Why Do We Keep Getting It Wrong?

Why Do We Keep Getting It Wrong?

We, as Americans, are continually amazed at the hatred and distain we experience from other nations and foreign groups who seek to destroy our way of life.  We wonder why, when we try to spread democracy, we are reviled.  Why would others not embrace freedom?  Why don’t they get it?

What we fail to understand is history and the psyche of our fellow man.  Throughout history, mankind has been a tribal creature, seeking leadership from the strongest of their group.  Survival rested upon the fittest of the group.  A weak leader meant death, not to just the leader, but the entire group.  Now, add into the mixture human nature.  The strongest group member must, by nature, have the mentality of a bully.  Without that ego and control, the leader could not maintain power as a leader.  Soon, they learned how to breed the best of the tribe for leaders and strong tribal members.

For survival, only clans who created conquerors, kings, emperors, caesers and tyrants lived and prospered.  Subservient classed existed for the menial labor and production, while the ruling classes kept survival of the clan as their sole duty.  But, human nature, being the fickle finger of fate, left the door open for corruption.  John Emerich Edward Dalberg-Acton, 1st Baron Acton remarked “Power tends to corrupt, and absolute power corrupts absolutely. Great men are almost always bad men."

Ideas of freedom, equality and independence were so abstract, as to not even enter into one’s hopes or dreams.  For thousands of years mankind existed as the schism stretched between the haves and have not’s.  Tyrants were the norm, no longer the exception.  Life, as such, went on, until a monumental event forever changed life on Earth.  The Christ arrived and his name was Jesus of Nazareth.

One man, brought hope and novel ideas to all mankind, by showing that men of power could be lowered in stature, while the lowest of low could be elevated on par to kings and conquerors.  Men could be freed of their bonds and seek a better life.  One no longer had to fight with their fellow man, but unite to work for greatness.  One could rely upon their own self and think independently without dominating others.  People could look at their fellow man, as an equal, not as someone to be dominated or controlled.  The idea that, there is a higher purpose to be obtained and life was worthwhile.  One no longer need to simply exist, but happiness could be gained.

What revolutionary ideal.  A new religion, Christianity was born.  Ah, but pesky human nature must intrude. How could the tyrants continue to enjoy their privileges, without a subservient class kept under their control?  The two worlds must clash.  One group struggled to exert control in order to survive, the other to strive for freedom and equality in order to achieve peace.  While despots experienced mental highs in seeing others crushed under their boot heels, spreading Judeo-Christian ideals showed humanity, that great joy could be found in exercising Christian ideals.  Even without knowing true Christianity, people began to understand and spread the ideals.

The United States of America was born upon these ideals.  For the first time, in the history of mankind a nation was created for the express purpose of freedom, equality, independent self-reliance and a generous human nature.  However the despots, could not allow such a nation exist, if they were to survive.  What we enjoy as second nature as Americans, millions of subjects of foreign nations do not understand or ever experienced.  A creature bred, born and raised in a cage, cannot understand existence outside of that cage.  Their subsequent offspring born into life in that cage, with each generation will lose the desire to break free of the cage.

Despots knew that the spread of Christianity was dangerous to their existence.  400 years after its birth, Islam was created as a counter religion.  Within the very religion of Christianity, despots sought to control by rising to its leadership.  Even today, the tyrants work 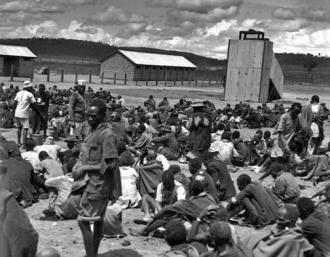 to subvert the Judeo-Christian ideals that formed our nation from within the ranks of leadership.  It is a never ending battle.

We, as Americans, fail to understand, we are fighting more than just despots.  We are fighting the fears of the caged people who’ve never known the ideals of freedom, equality and self-reliance.  How can a people embrace democracy, when their daily lives are controlled as to what they wear, live, eat, work or even think by the ruling class.  Our nation building is failing, because we are trying to force our ideals upon people who are afraid of stepping out of the cages.  They face the unknown and they are scared stiff.

We are better off, if we focus more on rebuilding our crumbling freedoms, liberties and independence.  We must disengage ourselves from trying to control all international affairs and concentrate on preserving our self-interests.  Our ideals are best spread by example, not by war.  By showing the world, what true freedom as a democratic republic looks like, by our prosperity and exceptionalism, we can spread Judeo-Christian ideals.  People will look to unlock their cages and taste the sweet air we breathe.  People will rise up and cause their governments to change.  It is a slow process, and we are an impatient people.  We must learn that we cannot change to world overnight.  No nation will change unless its people seek that change.

South Korea is free and prosperous, because its people sought change.  Hong Kong remains free while under the rule of Communist China, because its people strive to keep freedom. South Sudan broke free, because they sought liberty and independence.  As others see, once the cage doors are opened, they can step outside of their bonds and achieve a better life.  But, they must want to take those first steps.  We cannot force them.

One way we can encourage and grow American ideals is to stop enabling the tyrants with foreign aid.  We must stop helping tyrants to stay in power, while on the other hand working to topple them.  No foreign aid to China, Russia, Iran, Syria, Hamas, Hezbollah, Palestine, Venezuela, and any other country that will take our taxpayer dollars, then work to undermine us as a nation.  Pull out of the United Nations and send it packing.  We do that and I predict, suddenly, nations will come groveling at our doorstep to curry favor once more.  You want Immigration Reform?  Stop all aid to Mexico, Honduras, Guatemala and any other nation, whose people are invading our borders illegally.  Guatemala is complaining that they are losing their children, and we are stealing their resources?  Give them back, humanly with our blessings.  Then, offer to help build the universities, schools and hospitals.  Staff them with our people, who will teach their people to maintain them and we will spread American ideals without firing a shot.  We can nation build, but we must do it with one mind at a time.

Posted by Southern Sense at 8:13 PM No comments: Links to this post

The Fight Is On! DUMP Lindsey Graham & Meet Thomas Ravenel

Senator Lindsey Graham needs to pull out the big guns, because Thomas Ravenel is on his tail.  The one political powerhouse in the State of South Carolina who can beat him has entered the race!

South Carolina bad boy, Thomas Ravenel will be on air, today at 2pm EST.  If you miss him live, catch the podcast!

www.RavenelForSenate.com
Posted by Southern Sense at 11:32 AM No comments: Links to this post

This is  the year we turn our government back on the path of sanity!  We started in the last election cycle with the House and made a dent in the Senate.  But, this year we move deeper and stronger!

With the run amok, wooly nelly Obama Administration on immigration, no wonder our borders are being over-run!  It's not an over-run, it is a full scale invasion!

Tuesday, July 15th at 2pm EST we have the honor of Roan Garcia-Quintana as our guest.

Immigration is not the only issue, but it is one that is titling our economy and society off balance.

Join us, as we are now carried on Pundit Press, Kinetic HiFi KLIX out of Charleston, SC, Patriot Radio Network, TEA Party Community and Ghostfighter Radio, as well as podcasts on Stitcher, iTunes and Blubrry.
Posted by Southern Sense at 10:20 PM No comments: Links to this post