Obama's In You're Face Video 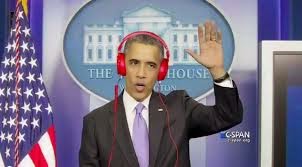 Usually, I receive hundreds of emails daily and many are SPAM, junk or repeats of similar stories from other followers. The same story makes the rounds of all the trending websites and bulk email (mass mailing) lists.  Sifting through them is tedious and often many are deleted, after perusing the sender, subject line and a quick open to see if further reading is worthwhile.

However, a bulk email today caught my eye and made me look further.  As I opened it, I thought this can't be real, it has to be a spoof by another site to mimic and mock the White House.  Always one to find a good laugh, I clicked on the TWEET and then the video.  It was described as the opening moment for the White House Press Correspondence Dinner.

Wow, I thought, someone made a great spoof of President Obama.  My next step was to verify the source, since was made to it looked as if it came from the White House.  I went directly to the  White House website at http://www.WhiteHouse.gov and everything looked normal.  Going to "The Briefing Room" and "Latest News" brought me to http://www.WhiteHouse.gov/blog and a series of pro-Obama stories. Okay, that's normal, so I scrolled down to peruse the articles and then it hit me!

It wasn't a spoof from a "Right Winger", it was the White House's own creation.  To the tune of The Clash's "I Don't Care" the video caption reads: "Beats by Barack. The President and Grumpy Cat: The Interview. And a South Lawn swim ... welcome to the fourth quarter. ".

It crows about President Obama's Executive action on illegal immigration, with a commentator bragging "He's now doing things his own way."  and a headline touting "Obama Unleashed".

You just can't make this up. The shear arrogance and contempt for the American people, the Constitution and rule of law is astounding.  The video ends with graphics showing President Obama kneeling with a hammer and chisel at the side of a mountain followed by his newly carved image on the face of Mount Rushmore.

The fact that the White House spent tax payer dollars to create this video to allegedly spoof the very actions his opponents object to and to lampoon them is baffling.  Rather than finding it amusing, I found it a portent of more unilateral actions from this administration to come in the near future.

Welcome to the Fourth Quarter of the reign of totalitarianism.

The White House blog is run by Lindsay Holst,Director of Digital Content for the Office of Digital Strategy.  According to the site; "Lindsay Holst joined the White House in September of 2013 and currently serves as Director of Digital Content. Prior to this role, she served as Deputy Email Director for the 2012 Obama for America campaign. Previously, she served as a writer at the Democratic National Committee and former campaign strategy firm MSHC Partners, and has occasionally tried her hand at screenwriting. A native of rural Pennsylvania, she is a graduate of Boston University."

I wonder what the reaction from the left would have been if the administration of G. W. Bush pulled a similar stunt?  Not as docile as were are!
Posted by Southern Sense at 1:27 PM No comments:

Free College At Conover U. For You, With Prof. Rodney Lee 04/14 by Southern Sense Talk Radio | Politics Conservative Podcasts

Free College At Conover U. For You, With Prof. Rodney Lee 04/14 by Southern Sense Talk Radio | Politics Conservative Podcasts

Hillary Clinton for President Wacky Season in full blast --->>> Next up

Chris Christie
and others to join the silly season.

But, just how silly is it, when our Republic's future is at risk?

How
willing are you to participate and help restore our Constitutional
Republic?
It won't be done in one (1) election cycle, so are you willing to stay
the course and fight on?

These are tough questions, so are you willing to dig deep and to answer
honestly?
Posted by Southern Sense at 11:34 AM No comments:

This a show you don't want to miss!

Veterans who still serve the interests of everyday Americans!
Posted by Southern Sense at 8:58 PM No comments: